Floor-ni-ture (noun) - that part of a room, hallway, or the like, that forms its lower enclosing surface and upon which one walks… after which you have invested so much time and energy where it becomes more like furniture than a floor.

That about sums it up… just registered floorniture.com in case you were thinking about it.  Just spent the last 2-weeks installing the flooring that I bought in July (Down on the Floor, July 15 2012).  This is one of those endeavors that make you question everything when you are half way through, but the end results were certainly worth the effort.
Reclaimed flooring is, to say the least, very irregular.  The typical method for installing flooring like this is to simply nail it down, float it with a huge amount of neutral wood filler, sand the hell out of it, stain, and urethane.  What you end up with is a smooth floor with a lot of detail, but certainly not something that was true to the original wood you laid down.  I wanted something different.

If you will remember, this was wood pulled from a barn in West Texas that was built in 1901.  With its quarter sawn grain and scars from heavy use, I wanted to preserve as much of that character as I could.  So after careful consideration, I decided to run each plank through the shaper again to round over the edges and committed to laying down and finishing each plank by hand.  This would give me a floor that actually looked reclaimed.  A much more authentic and irregular floor, made up of individual hand crafted planks.

How we laid the floor was just one aspect of the project.  The other was how to fill the immense number of holes and imperfections in the wood without losing the detail.  After deliberating for several days, I came up with the idea of using black wood filler, thinking that it would provide a good contrast and highlight the imperfections that make reclaimed wood so interesting.  I spent quite a bit of time researching black filler and couldn’t come up with anything I could get in quantity that wasn’t cost prohibitive.  Not deterred, I set out to create my own tinted wood filler.

It took a few days, but I persevered.  I now have two or three alternative formulations for tinted wood filler that I can use depending on what I am doing.  Any color of the rainbow.  After a few tests, I decided to stick with more earthy tones for the floor and settled on a deep green, navy, and of course black.

Keep in mind that by the time these are stained and urethaned, they are super subtle. Since the filler is harder than the wood, over time they will become more pronounced as the floor gets worn a bit.  All in all, I am very satisfied with the results and especially like the creative options it gives me later in the studio.

After the stain and urethane went down, the true character of the wood emerged.  This was certainly more difficult than I had originally anticipated, but whatever misgivings I had as we were going through the process evaporated once I saw the final product.
Posted by Kenneth Crain @ Studio 217 at 12:59 PM No comments:

The design of the staircase is coming along nicely.  It’s important to get this one right because it is a focal point when you first walk into the loft.  For a number of reasons (extensive indoor welding being one of them), I have decided to fabricate the piece in three distinct phases.  This first phase will be the design, fabrication, and installation of the supports for each stair.  Each tread will be a reclaimed 5” x 12” beam protruding from the wall supported by a steel upright welded to the beam already in place.

Straying from the original sketch, I decided to build a more elaborate prototype for the support using MDF and placed it on the beam to ensure I got the angle correct.  Once this detail was hammered out, I then started to fabricate 17 of these out of ½” steel.

Once complete, I then welded each of the uprights to the beam.  This will be as far as I go this round.  Most of the messy stuff is done and I feel comfortable laying down the floor.

Once the floor is down, I will work on an architectural to go underneath the stairs to give it more depth (phase 2), and then there is the task of creating and installing the steps themselves (phase 3).  Stay tuned...
Posted by Kenneth Crain @ Studio 217 at 3:58 PM No comments:

Old school.  If it’s not steel or wood, then it’s brick or tile.  That’s the feel we am going for here.  I have been searching high and low for some good reclaimed brick, but continually come up empty handed.  The stuff that is out there is very rough, expensive, and only available in small quantities.  Who knew it would be so hard to make something look old?

After spending some time with my Dal-Tile rep here in the Design District, she turned me on to a local group that manufactures some good looking pre-fab brick.  I have experimented with a number of other types of manufactured stone and brick, and they all pretty much have the same limitations.  The main one for me being that they explode when you heat them up quickly.  This is important because I plan on melting things (or burning them off) to create more authentic patinas, mostly in place once they are installed.  Think sun bleached, pollution stained, peeled and chipped paint on a brick wall in an alley someplace…

This stuff is great.  You can do just about anything heat related to it and it doesn’t seem to respond (and by respond I mean explode in your face).

As for tile, nothing beats old school.  Subway tile, black and white, can’t go wrong.  Settled on this pattern for all five bathrooms. Here are some pics…

Things are getting a little crowded here at Studio #217. I was able to negotiate a deal on the adjacent warehouse which now gives me over 12,000 square feet of space.  There is much work to be done on this new warehouse as it is in pretty bad shape inside.  I won’t take possession of it until early next year, but went ahead and painted everything flat black out front. 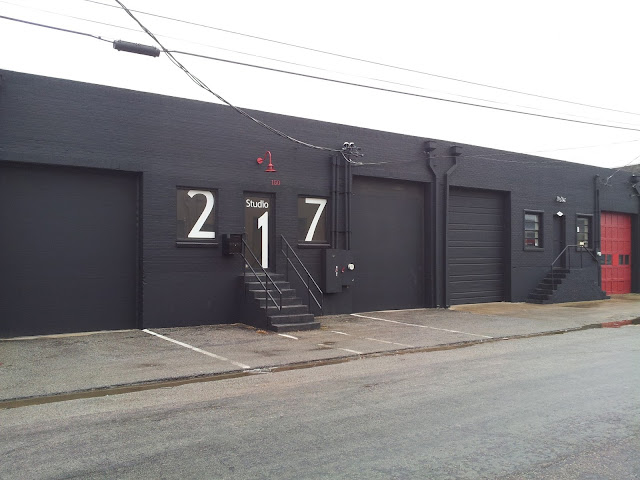 Been a busy 14 weeks of construction.  Not much structure to any of this yet, but thought I would share some pictures of the progress.

This is one of my favorites, and it never gets old…

First some background information -  One of the materials I will be working with extensively is concrete, in all its various forms.  Countertops, table tops, furniture, sculpture, all sorts of useful things that can be cast with concrete if you take the time to understand it.  The material is quite amazing.  It’s a proprietary mixture of cement, aggregate, sometimes other found objects like broken glass or molten aluminum etc., and very small strands of fiber to reinforce the mixture and cut down on the weight.  Challenge is, when you pour concrete into a mold, in order to perfect the cast, you need to have some way to get the air out. As it turns out, if you vibrate the whole thing at the right frequency, the air simply bubbles to the top and exits.  Hence the need for a really big, long table that floats on air and vibrates.

Common sense tells us that concrete is heavy, so the first thing I did was design a really strong frame.  The specs for the table worked out such that it would hold over 4,000 lbs and be maneuverable around the studio.  Lots of steel, big casters.  Got that.

Once the frame was assembled I installed a pneumatic air lift system using some air bags originally designed for automobiles… think War’s (Why Can’t we Be Friends) circa 1975 “low-ride-er”.

And a control system that would allow me to gently control how much “float” was in the table so I could better manage the frequency of the vibration (lower for lots of dry material, higher for wetter cement).

Voilà, a 9 ft table that lifts up, floats on air, and vibrates.

To test the table I went ahead and cast a counter top for one of the vanities in my loft (guest bedroom).  Here are some pictures of a small concrete top being cast in a 2-part mold.

Everything worked out perfectly.  When I’m not using it for concrete, I can use it as a mobile workbench.

Purchased another building this week... (some assembly required).

As the story goes… I was walking through a friend’s warehouse when I came across this large bundle of reclaimed building timbers.  These were beautiful, center cut, long-leaf pine and some cypress from the late 1800s.  Always in the market, I asked where he had found them?  Then things got interesting… really interesting.

As it turns out, demolition had already begun on the sprawling Armour Meat Packing Facility in the historic Stockyards of Ft. Worth.  Built in the late 1800s and opened in 1903, this facility was key to the growth of the cattle industry and the ensuing culture of Ft. Worth which remains today.  After some quick research, I found an article (excerpt below) in the Star Telegram which best describes the project:

From the Star Telegram: “More than 90 percent of the buildings, including bricks, cypress timber, steel and concrete, is expected to be recycled, Britton said.  Three metal buildings, a brick building, storage tanks and other small structures have already been removed from the site. The remaining structures will take about four months to demolish.  "There are some wood beams in there that will blow you away. Some of that wood will be worth a bucketful of money," Brinkley said.” (read more here)

Historic building?  Lots of great timber?  90% recycled demolition?  I jumped at the opportunity!  A few days later I was at the demo site watching the timber being stacked into bundles.

As I began to inventory and decide what I could use, I remembered the experience I had last year when I tried to buy an antique box car (see earlier post).  Enough said, I bought the whole lot.  50,000 board feet of reclaimed timber.  Enough to build over 400 pieces of beam-inspired furniture and architecturals.
It’s beautiful stuff.  I am very excited to have landed it. Take a look at these pictures…

I would be remiss not to mention that when doing research on the building site, I came across some beautiful low-light photo work by a local photographer named Noel Kerns. His photographs are of the Swift side of the Swift/Armour industrial site.  I encourage anyone to visit his website to see these under "Industrial Decay" as well as the other photographs he has taken. Beautiful stuff!

Studio #217 is based in Dallas and specializes in furniture and architecturals that combine new, reclaimed, and upcycled materials. For more information, please visit our storefront @ www.studio217.com.