Coffin Racer for Denton's Day of the Dead Festival

We have been hard at work in the Studio so we decided to take some time and create something fun. A friend of mine informed us that Denton hosts a Day of the Dead Festival each year. This festival is home to a soapbox race featuring coffin cars. Having never even been to a soapbox race, let alone building a soap box racer, we signed up. Over a team meeting, we came up with Race in Peace (R.I.P.) as our coffin racer’s name. We wanted to do something different from the competitors so we designed our coffin to be colorful and groovy.  Our creative process was as follows.

Ken built the chassis using a steel frame, which included a steering wheel. We knew that the coffin car was something that we were going to want to keep so we weren’t thrilled about the idea of slamming it into a stack of hay bails to stop the momentum. Ken fabricated a brake system that allowed me to push on the pedals and it would effectively stop the back two wheels.

For the body, we cut the frame of the coffin on the CNC machine. The total length of the coffin ended up being nine feet long to house the chassis and allow for more than one driver. Ken hand-shaped a wood fairing for design and aerodynamics.

To execute our vision, we made the decision to paint the body like an old school red and white VW bus and add some groovy details.

We had so much fun the day of the festival. We brought our kids to cheer us on as we competed against 40 other coffin cars. We ended up placing 10th out of 40. We were very pleased with this considering it was our first attempt at soapbox racing. Here I am ready for race #2. 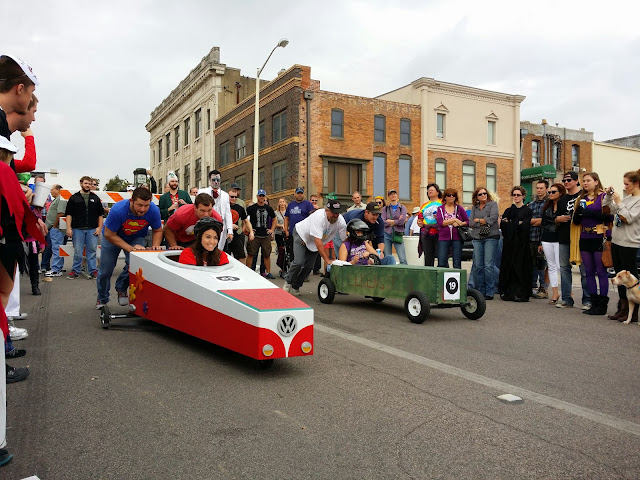 Thank you to all of our friends and family that came out to help and root us on. See you next year Denton!
Posted by Studio 217 at 12:39 PM

Studio #217 is based in Dallas and specializes in furniture and architecturals that combine new, reclaimed, and upcycled materials. For more information, please visit our storefront @ www.studio217.com.